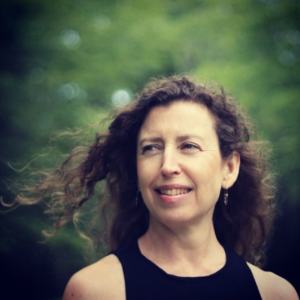 Stephanie Heintzeler is a German educated midwife and acupuncturist as well as US-educated doula and Lactation Consultant (IBCLC). She was born in New York City but raised in Germany, where she found her enthusiasm for midwifery already when she was 12 years old- thanks to her brother who was born then. She successfully finished her midwifery-exam in 2000 at the midwifery-school in the Black Forest of Germany.

While she was working in Frankfurt she started to get interested in TCM (Traditional Chinese Medicine) so she continued her education in Acupuncture and acquired her certification in 2003.

She moved back to her birth town in 2003. Her book “New Yorker Geschichten” (“New York Stories”) got published and she started her own Doula business after she had certified with DONA in 2006. In 2010 she founded Preggie LLC in Germany that imports Preggie Pops (www.preggiepops.de) from the US.

Stephanie cares for women with all kinds of births- whether her clients choose a hospital birth, birthing center or home birth; she wants them to follow their own intuition about which birth place feels best. Stephanie has seen it all- breech births, many successful VBACs (Vaginal Birth after Cesarean), planned and unplanned c-sections, vaginal twin births and LGBTQ-families.

With a former midwife-approach her clients feel taken care of from a holistic-medical perspective. She uses breathing techniques and positions to open the pelvis as well as her acupuncture background to make birthing as comfortable as possible.

As of 2018 Stephanie has delivered over 2,500 babies and attended over 3,000 births. She is the owner of the New York Baby where she puts expecting parents/mothers in touch with doulas and baby nurses.