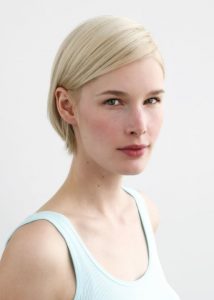 E. became interested in birth work prior to giving birth to her daughter in 2011.  She hired a doula for her birth as she had no family in NY and just felt she wanted to have a woman support her birth along with her husband.  She had what she would describe as fantastic birth that was truly empowering.  She then had another baby two years later.  For some reason she decided she didn’t need to hire a doula for that birth.  While she was in labor she realized that was a misstep.  Everything went well and she once again had a fantastic and fast birth, but she just knows it would have been great to once again have that extra support her doula provided her.  Since going through pregnancy, birth and new motherhood E. has become a birth addict.  She marvels “How amazing are we women who grow humans in our bodies and bring them into the world through birth!?”  Her hope is that she can provide the kind of loving support to mothers that her doula provided her.  It really makes for a great entry into motherhood.

In E.’s free time she enjoys baking, knitting, going to yoga and training at the gym.  She lives in New York City with her two children, husband, a dog and two rabbits. E. is a Dona trained birth doula.  She holds current certification in Adult and Pediatric CPR/AED. She is a certified and registered yoga instructor through Yoga Alliance at the 500hr level.  She has also trained in Thai yoga body work.

My husband and I live overseas but came back to NYC for the birth of our first child. Although I wasn’t sure at the outset whether having a doula would really be “worth it,” choosing E. as our doula proved to be an excellent decision. Coming from overseas and arriving just six weeks before my due date, there were a lot of things to figure out, including narrowing down which doctor/hospital to go with. E. was incredibly helpful from the get-go, sharing her experience at various hospitals in the city and giving us a sense of what we could expect during the labor and delivery. During the labor itself, E. was a calming influence and a low-key, supportive presence. She and my husband took turns being with me in triage, where I spent over five hours. During that time, as the contractions got stronger, Emilie helped me breathe, shift positions, and massaged me to help ease the pain. When I got sick and threw up (twice), it was E., not the nurses, who cleaned me up and reassured me that what I was experiencing was completely normal and a sign that I was advancing in my labor. Although I had hoped not to have an epidural, when my labor went on and on (it was 20 hours in total), and the pain became unbearable for me, E. was not at all judgmental when I decided to get an epidural. Later on, as we got closer to the delivery and the doctor informed me the baby was not in the ideal position to come out, E. successfully used a rocking technique to shift the baby into position. She helped me during the pushing stage as I tried different positions and also helped my husband support me during the delivery, since we were both going through this for the first time. Finally, she was great not only for the two of us, but also for my parents, who were anxiously waiting in the hospital. She went out to give them updates and reassure them that things were going well. Following the birth, E. stayed in touch, making sure we were doing ok and sharing her experience and knowledge on some of the challenges we faced. She gave us the space that new parents need and also made clear she was genuinely interested in how we were managing. We spent a lovely few hours with her a few weeks after the birth, and she gave us an innovative idea to help with a breastfeeding issue. In sum, I am so glad we chose E. as our doula!
– Rachel

E. has been a tremendous blessing to our family. As a first time mom, E. has been a constant source of support along the way — from answering questions to setting up weekly FaceTime calls. She would also occasionally send inspirational emails or pass on an article for me to read, just because she saw it and thought about me. Her care and concern clearly shows. She is calm under pressure (we had a pretty rough delivery) and stayed with us till the very end, even sleeping in a chair during my labor when we all needed some rest. Just knowing that she was in the room and knew the right questions to ask helped put me at ease. It gave me the peace of mind to focus on myself and the baby while E. spoke with the doctors. She asked questions that neither I nor my husband would have ever thought to ask. She is reliable and easily reachable by phone or email. We had a wonderful birthing experience made largely in part by E. and will not hesitate to recommend her to anyone seeking a highly competent doula.
– Lydia

“My husband and I clicked with E. right off the bat. We really appreciated her science-based approached to pregnancy and labor and felt that she would be a great advocate for us at the hospital (I did not want to be forced into having a C-section). And we were right! E. checked in on me continuously during my pregnancy and gave me tips on inducing labor when my daughter was late. When I finally did go into labor E. was in constant contact with us, she was at our apartment during the early stages and stayed overnight at the hospital, asking the doctors and nurses questions I hadn’t thought of. When it came time to push, E. was the one holding my leg and encouraging me. She was an enormous help during my 30 hour labor, and her calming presence helped keep me centered and sane. I would recommend E. to anyone looking for a knowledgeable, calm, yet fierce advocate!” — Aneya